This article is one of a special GOOD Morning Wilton series to highlight A Better Chance (ABC) of Wilton. GMW is a proud sponsor of the ABC House Tour on Friday, June 7, and the Preview Party this Sunday, June 2. To purchase tickets visit the ABC Wilton website. Today, GMW looks at just how life-changing the ABC program can be, both for the scholars accepted into the program and for the families that become their home-away-from-home surrogate families.

It’s amazing how one choice can entirely change someone’s life.

That’s what happened when JP Clarke decided to apply for a program run by the non-profit organization, A Better Chance (ABC). The group’s mission is to provide access to high-quality education for children of color, in order to empower them to achieve positions of leadership and responsibility in society.

Clarke, then 14 years old, had only moved to Harlem from Jamaica two years before when an academic counselor told him and his parents about ABC. After being accepted as an ABC scholar, he settled on Wilton as his choice for placement, to begin as a freshman at Wilton High School in the fall of 2010. That decision, too, altered JP’s life path entirely.

Coming from Jamaica, by way of Harlem, to Wilton was certainly a culture shift, in so many ways, as it is for many of the scholars. Add on a rigorous academic schedule, extracurricular activities, and being away from family and home, there was a lot to get used to.

JP was eager to acclimate.

“I can definitely say when I came to Wilton I was more Jamaican than a New Yorker. I met new people and it didn’t really matter to me that I looked very different than them. I remember when they said the statistic, the high school is 96% white. I just acclimated with people very easily off the bat just because I just wanted to make new friends, you know?”

In addition to living in one of two group houses, each ABC Wilton scholar is matched with a Wilton host family that commits to providing scholars with a personal, family-away-from-home respite every Sunday and one weekend a month.

As luck would have it, JP was matched with the Lamason family–mom Lisa, dad Dave and kids Cara (then a WHS junior), Troy (a freshman, like JP) and Zoe (then in 7th grade). They were just as eager to embrace JP as he was to fit in. They planned outings like zip lining and rope course trips, went out to dinner, and took JP along to whatever activity they were doing.

“Our goal was to include him as part of the family, we always had that in the backs of our mind, wanting him to really be a part of everything,” recalls Lisa. “It’s how the kids were raised anyway, everybody had to play with everybody sort of thing. We were very lucky that JP opened up to us too. He’s a very sweet person, he doesn’t have an angry bone in his body.”

Lisa approached being an ABC host mom the same way she went about being a mom to her own kids.

“You’re playing this role of support system, ‘What do you need? Please call me if you need anything.’ ‘Oh yeah, I’d love to go get a haircut.’ ‘Okay, I’ll pick you up Thursday afternoon after school. Make sure it’s okay with Mr. Gordon, go down and get your hair cut.” Sit around for a couple of hours, bring them home. And then all of a sudden, you’re doing that enough, and then they’re here on the weekends enough, that you kind of are creating some sort of a routine and relationships.” 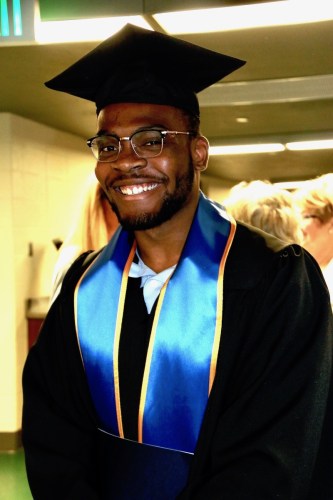 It made a difference, says JP. Everyone involved in the ABC program is dedicated to helping the scholars succeed–from the people who volunteer as college coaches to drivers to board members. But the host families become the surrogate home base, providing a sense of security, stability and safe haven.

“What sums it up pretty well, is that they said they will never get another host kid, and it’s not because they wouldn’t live Wilton anymore, it’s because they felt like they invested so much in me. They approached the host family program almost like they were getting another son, it wasn’t just someone who was staying with their kids, like an au pair from another country to stay with the kids for just an extended period of time,” says JP. “It really always made me feel like I’m a member of the family and I never have to ask myself, am I welcome to this family event? We go on vacations together. I saw them all the time during the summer whenever I was back from college, it was expected that I’ll come back and see them.”

When JP adds that, “..it has a lot to do with having siblings that, or host siblings that were close to my age,” an observer points out how he first says ‘siblings’ before correcting himself to say, ‘host siblings.’ It’s clear, he really thinks of them as if they are much more closely related.

It’s clear the feeling is mutual and very much appreciated, as Lisa explains, just one day after her daughter graduated from college–an event that JP attended right alongside everyone.

“On Mother’s Day he called me, about what I meant to him. Yesterday when I checked and said, ‘Thank you so much for making the trip to the gradation. We felt appreciated. It was so good to be together.’ He says, ‘You are my second family.’”

She also describes the experience as something that everyone in the family benefitted from and grew as a result.

“My goal was I actually did this for my kids. I wanted them to be part of an experience like this, like it was good for them to be uncomfortable and have the family shift a little bit, and force them to open up their hearts a little bit. You’ve got the family dynamic–you’re the oldest, you’re the middle and you’re the youngest, then you throw somebody else in there and everything kind of has to shift. I really wanted that exercise for them, and I wanted to them to see us give back in a real meaningful way instead of just a donation of money. Time is probably the best donation you can give. My husband said it best, he said, ‘I’m just so glad we did this. It made our family better. It was the right decision.’”

JP graduated from Wilton High School in 2014, and went on to graduate from Notre Dame in 2018. After college, he returned to Wilton to work for ASML as a production engineer. For a short time after graduation, he moved back in with the Lamasons before finding an apartment in Norwalk.

“I grew up in Jamaica and then I spent some time in Harlem, but the bulk of my adolescence was in Wilton, and I think adolescence is a really important time in a person’s life. It’s when they’re pretty much coming into themselves. I always had a pull to come back to Wilton, even during the summers. So when I was searching for internships that junior year, Wilton was one of my first choices, even before New York because I had so many friends here and so many connections from high school.”

One thing JP knows is that his present and future has been a combination of his dedication and hard work, mixed in with a little serendipitous good luck that placed him with the right people in the right place at the right time.

“Having people like my host parents, that help ground you and give you support and make you feel like you’re not alone, when you moved away from wherever your home was, to a strange place–for a lot of these students that are coming to high school for the first time, that’s pretty much what they need most of all, people who support them,” he says, adding an acknowledgement of both the many ABC volunteers and the Lamasons:  “I get praised all the time for what I’ve accomplished thus far, but of what I’ve accomplished I can’t fully take 100% credit for. There’s a lot of people behind the scenes that helped make this happen.”

It’s that one choice from 2010 that has made so much of a difference on where JP’s life has taken him and where it will go from here–something that JP says he thinks about all the time.

“It’s just amazing that I got these amazing people in my life. It sometimes you have to sit back and look at it and think, wow, I always have the right person at the right time to steer me in the direction that I need to go, and that I don’t ever know what direction I need to go, and I know I’ll never know where life’s going to take me. But it’s worked out thus far. Have trust in the process.”

ABC Wilton’s 25th Anniversary Celebration to be held at Ambler Farm in Spring 2022.  We will keep you updated as soon as a date is set!

These unprecedented times have impacted us all, including our ABC Wilton family. We are incredibly grateful for the outpouring of love and support you have all shown us.

A Better Chance of Wilton has taken the necessary precautions and followed statewide protocols and mandates to ensure our scholars are safe and at home with their families.

A Better Chance of Wilton is grateful to the community for their continued support of this vital program.  We send our best wishes to you and your family for a … END_OF_DOCUMENT_TOKEN_TO_BE_REPLACED  Read More

Our 2020-21 ABC Scholars would like you to know them a little better. Isabelle is a senior, Nia and Cindy are sophomores, and Fatou and Courtney are freshmen at WHS. … END_OF_DOCUMENT_TOKEN_TO_BE_REPLACED  Read More

A Better Chance of Wilton stands for the hope of equality in education + opportunity. We will continue to speak out against the inequality facing the black community in America. … END_OF_DOCUMENT_TOKEN_TO_BE_REPLACED  Read More

These unprecedented times have impacted us all, including our ABC Wilton family. We are incredibly grateful for the outpouring of love and support you have all shown us. A Better … END_OF_DOCUMENT_TOKEN_TO_BE_REPLACED  Read More

By Heather Borden Herve, GMW Editor – February 14, 2020 After the success of its first podcast, Stay at Home in Wilton has released the second in the series, “The Story Next Door,” bringing two … END_OF_DOCUMENT_TOKEN_TO_BE_REPLACED  Read More